Digital Joystick for a CoCo?

From time to time, we see requests on the CoCo mailing list for ways to use digital joysticks with the CoCo. You see, the CoCo is designed to use analog joysticks for pointing, like the Apple II or the IBM PC. Joysticks like that are good for applications requiring precise positioning, like Flight Simulator or the old game Doubleback. But for action-oriented arcade games like Pac Man, Frogger, or Donkey Kong, the brute force choice of a simple direction is usually preferred over precise positioning. Worse, like the Atari 5200, the original CoCo joysticks weren't even self-centering...

While the later "deluxe" CoCo joysticks addressed the self-centering issue, analog joysticks still feel a bit sloppy for most arcade games. One option is to build an adapter that allows the use of common 9-pin digital joysticks like those used on the Atari 2600, the Commodore 64, and other machines from that era. Such adapters are built around a single integrated circuit, are relatively simple to build, and allow the use of unmodified digital joysticks with the CoCo. Tim Lindner has a YouTube video of him building just such an adapter. 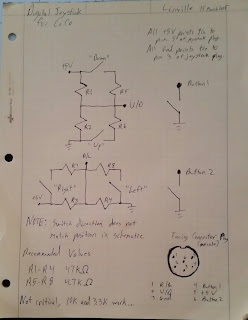 The other option involves either hacking an existing joystick to work with the CoCo or building your own to do so. These options are essentially the same, each requiring a circuit to convert switch closures into analog voltages that are meaningful to the CoCo. A hand-drawn schematic of such a circuit is shown above.

Unlike the Apple II and IBM PC, the CoCo does not use an RC timing circuit for measuring joystick position. Instead, the potentiometers in the CoCo joysticks are wired as voltage dividers. This allows for less precision in the exact choice of components, since there is no need to match-up against anything internal to the CoCo. The biggest concern would be choosing resistor values so small that the joystick burns-out the CoCo power supply. Caveat emptor!  But if you stick to the values in the schematic above, I think you will be fine...hopefully... ;-)

The original idea for the circuit came from a post about the Vectrex, which uses a similar design for its joysticks. On each axis, the resistors are wired in an "H" configuration. The resistors on one side (the side always connected to power and ground) are significantly larger in value than the resistors on the other side of the "H". The switches are connected across the top and bottom of the "H". When a switch is closed, the equivalent resistance of the large and small resistors connected in parallel is much smaller than the value of the single large resistor on the other end of the "H". This causes the voltage at the center of the "H" to swing accordingly, fooling the CoCo into thinking that the (non-existant) potentiometer has been moved in the corresponding direction.

It would be tempting to eliminate the smaller resistors in the "H" configuration, causing the switch closure to pull the axis voltage directly to the rail voltage. The problem is that if a mechanical failure allows a pair of opposing switches to be closed at the same time, then you will have a short circuit that could damage the CoCo. Keeping resistors in the path should limit the possibilities for damage. I strongly urge any circuit builders to keep both sets of resistors. 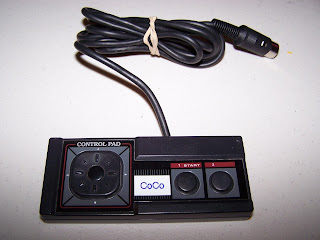 I hope that others will find the information useful. I know of at least one other person that has used this schematic to build a CoCo joystick out of arcade components, much like I had previously done for my Fahrfall joystick. If you have any questions about the schematic, then feel free to leave them for me below. Also, you can download the PDF of the circuit if the picture of the schematic above is too small to be useful.